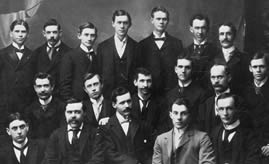 Lexington Theological Seminary is the pioneer theological school of the Christian Church (Disciples of Christ). It is located within the Bluegrass region of Kentucky where much of the Disciples’ early history occurred. The Seminary has played a vital role in that Church’s development.

Lexington Theological Seminary is the lineal descendant of the Department of Hebrew Literature in Bacon College, founded in 1836. With the rechartering of Bacon College in 1858 under the name of Kentucky University, the biblical department was considerably expanded and renamed the School of Biblical Literature and Moral Sciences. 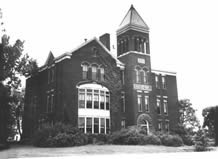 The Seminary dates its founding from 1865 when it was The College of the Bible, one of several colleges in Kentucky University. Another of these colleges was the College of Agriculture and Mechanical Arts, which separated from its parent institution in 1878, and through a series of name changes emerged as the present University of Kentucky. The Seminary acquired its own charter in 1878 and occupied buildings on the campus of Kentucky University (Transylvania University) until 1950, when it moved to South Limestone Street in Lexington. At its centennial in 1965, The College of the Bible was renamed Lexington Theological Seminary.

Thus three institutions of higher education in Lexington are of the same background: Transylvania University, the University of Kentucky, and Lexington Theological Seminary. Lexington Seminary and Transylvania are members of the Higher Education and Leadership Ministries of the Christian Church (Disciples of Christ).

In 1936 the school began requiring a bachelor’s degree from an accredited college for admission, thus becoming strictly a graduate institution. Two years later the Seminary played a leading role in the formation of  The Association of Theological Schools in the United States and Canada, the official accrediting agency of theological institutions. The Seminary also established the first chair of religious education in the nation, instituted one of the first courses on the ecumenical church, and was the first seminary in the United States to offer clinical pastoral training as a part of its curriculum.

Lexington Theological Seminary in the 21st century transformed its educational model for clergy preparation to integrate the congregation as a full partner in the preparation of pastors for leadership in the church. In 2013, the Seminary moved from a residential model and campus to its present location at Lexington Green Circle.

Lexington Theological strives to prepare faithful leaders for the church of Jesus Christ, and, thus, to strengthen the church’s participation in God’s mission for the world.

On March 13, 2020, the President of the United States declared a national emergency, “Declaring a National Emergency Concerning the Novel Coronavirus Disease (COVID-19) Outbreak,” concerning the COVID-19 pandemic. As the pandemic continues, we urge all members of the Lexington Theological Seminary community to keep up to date with necessary health and safety precautions as recommended by the Centers for Disease Control (CDC) website: https://www.cdc.gov/  including https://www.cdc.gov/coronavirus/2019-ncov/index.html  for general updates and Information and https://www.cdc.gov/coronavirus/2019-ncov/php/public-health-recommendations.html for the latest information on public exposure issues.

The Seminary also urges all community members to obtain specific health and safety information from their private healthcare provider and local health care authorities, as well as state and local government sources. For information on Kentucky guidelines and testing locations see: www.kycovid19.ky.gov