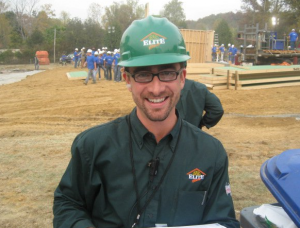 A muddy construction site at midnight is far from the traditional classroom setting, but for Lexington Theological Seminary student Joseph “Joey” Pusateri, it was the ideal place and time for furthering his understanding of ministry.

It was October, and Joseph’s family’s business, Elite Homes of Louisville, was heading up the construction of a very special house—a home for the Lampe family, to be featured on Extreme Makeover Home Edition. The episode airs on ABC this Sunday at 8 p.m. EST.

The construction of the house was a ministry in itself to the 32-year-old husband and father of two. In the months prior to the build, Joseph had been in a bit of a quandary.

Joseph joined the family business in 2008 after moving to Louisville two years earlier. Neither he nor his wife, Jennifer, also 32, were regular churchgoers, but with their family growing, they sought out a home congregation. Joseph’s wife joined the praise band at Middletown Christian Church (Disciples of Christ) in Louisville, and Joseph soon followed in joining the church.

Then in May 2010, Joseph began to sense a strong call to ministry.

“I felt immediately that God had the wrong number,” he said. “I kept saying, ‘I don’t think this could possibly be right.’ I had come to work for my dad in the homebuilding business, and I thought this was the last move of my life. It put a big question mark on my career path.”

However, once Joseph set aside his fears and accepted the call to ministry, he knew it was the right thing to do. He just wasn’t sure how to attend seminary without disrupting the life his family had just begun to establish in Louisville.

“With the new online program, the more I researched it, it seemed the right direction to go,” Joseph said. “The online program at LTS was the only way I could do this. It’s exciting to break out of the old paradigm of how seminary is taught and let the technology take us where it will as we discover new ways to connect.”

The program offers two-thirds of courses for the Master of Divinity program online, with short, intensive courses at the Seminary. Other degree programs and certificates offered online are Master of Arts, Master of Arts in Pastoral Studies for Roman Catholics, Certificate in Pastoral Ministry, and Continuing Education. The Seminary’s Doctor of Ministry program is expected to follow online soon.

Joseph was just getting started in the program when producers from Extreme Makeover Home Edition reached out to Elite Homes to build a home. Elite Homes also built a home for the show in 2007, before Joseph moved to Louisville.

“It was like a once-in-a-lifetime opportunity happening twice for our business,” Joseph said. “For me, it was an opportunity to help someone I had never met. In light of the calling I’ve had, I just felt it was something I should do. It was a long, arduous decision to make with the amount of commitment required for the build and for my courses.”

Joseph scaled back to one class for the month of October. He took his laptop to the job site and watched lectures and participated in online discussions with other students early in the morning, during breaks, and late at night. He recalled one night in particular when he was frantically searching for a WiFi connection among the mud and equipment so he could submit a paper before midnight.

“I’ve heard this process described as a glimpse of the kingdom of heaven, and it was for me,” Joseph said. “It takes all the planning and the people and the equipment, but it takes a whole lot more than that to pull it off. It takes a collective community of selfless participation as we all become one in this thing that’s greater than ourselves.”

The experience further fuels Joseph in his journey through seminary.

“I’m trying to learn everything I can so that I can be equipped to help people,” Joseph said. “Where that will lead, I don’t know. This is God’s calling for me—it’s not my plan for myself. I’m just taking one step at a time, and I know I will end up where I’m supposed to be.”

Lexington Theological Seminary is an accredited graduate theological institution of the Christian Church (Disciples of Christ).  Consistent with the Disciples’ historic commitment to Christian unity, the Seminary is intentionally ecumenical with students, faculty, staff and trustees of various denominations. The Seminary has been preparing leaders for the church since 1865. For more information, visit www.lextheo.edu.